Follows is the story of racing the ‘r65gs’ in the 2012 Australasian Safari.

Posted by tanami on August 5, 2012 in Motorcycling

New Yorker Jason Adams (below on his R100gspd) is to ride the Rooney R65gs in the 2012 Australasian Safari. Details on the ‘Race’ Page. 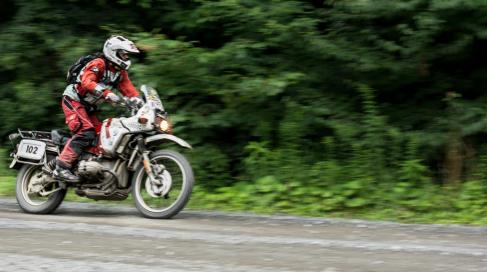 Posted by tanami on September 19, 2012 in Motorcycling

Yesterday I caught up by phone with Jason Adams who is now In Western Australia. He has already done a few hundred kilometers on the Rooney GS special which he described as ‘amazing’ and not at all like the r100gspd he is accustomed to punting through the forest of upstate New York.

The bike has been performing well and has required only minor suspension adjustment to suit Jason. Apparently Paul Rooney and the safari crew have been looking after him well as he seems to believe everyone is “really swell”.

Paul is impressed with both Jason and the machine so it’s shaping up for fun times ahead.

To wet your appetite, Ross Briggs took these awesome action shots below of Graham Grant at the 2010 Safari on the Rooney gs rallye.

Thanks for the Pics Ross!

Posted by tanami on September 20, 2012 in Motorcycling

After a thorough check over the venerable r65 today went through scrutineering.  A sand tyre has been fitted for Saturdays prologue, a 22km blast held just outside of Geraldton WA.

Tomorrow the team will make the 400km journey north to Geraldton and prepare for a prologue start at around 2.30 Saturday afternoon.  After that the fun really begins as the race heads out to Kalbarri, then Carnarvon and Gascoyne Junction.

The ambitious American on the old BMW is attracting some interest and plenty of support. One visitor, riding a HPN BMW dropped in to say howdy and ended up performing a dash on his own steed to grab the crew a required tank rubber.

Paul tells me that both the bike and Jason are performing brilliantly and they sure sound to be having a heap of fun. That there is what it’s all about. Here’s Jason with the beast in another picture courtesy of Ross Briggs. Ross deserves a special mention as he has kindly let  me use his images of Jason and the Rooney team on my blog. Thanks Ross, your images are always fantastic.

Posted by tanami on September 24, 2012 in Motorcycling

After a trouble free prologue (28th) and stage 1 (27th) special the Rooney Team experienced a minor upset in the stage 2 special when, during a minor off some overgrown trackside vegetation seized onto a cable and tore it out of the r65′s throttle.  Jason was assisted by another international competitor, Italian rider Francesco Beltrami to get the show back on the road but the incident lost the team some time and took their overall position back to 34th. Special thanks to Francesco for his display of sportsmanship and camaraderie.

Still , at the end of Day One the Team is about two hours behind the race leaders. An awesome effort with all things considered, and we have only just begun.

Today is even larger with two specials, the first being 278 and the second 238km. Here is Jason during yesterdays special (picture courtesy Ross Briggs)

Posted by tanami on September 25, 2012 in Motorcycling

Day Four – A stroll through the Kennedy Ranges

Posted by tanami on September 26, 2012 in Motorcycling 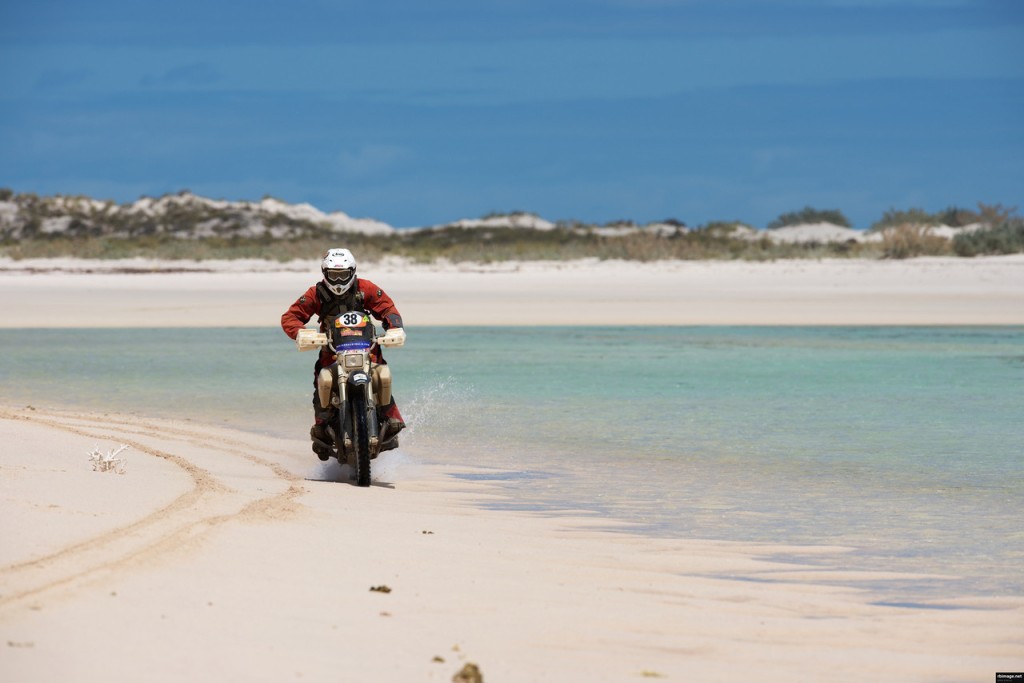 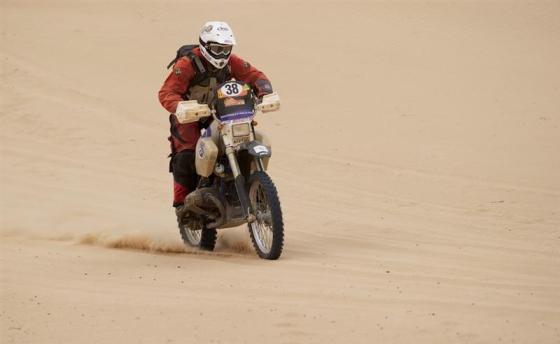 Posted by tanami on September 27, 2012 in Motorcycling

With the drama of day three behind them day four was trouble free, though challenging for Jason and the Rooney team. With sections 9 & 10 completed the team find themselves in Position 30 overall (of motorcycles).

Ross Briggs snapped the picture below of Jason navigating the rocky terrain of Leg 4.  The toll on vehicles for the day was high and to make matters worse the leg was ‘unassisted’ (4 bikes suffered mechanical issues in SS9 and were unable to complete). When Paul saw Jason bringing her home he cried “bloody beauty!”, the rocky sections had destroyed the Big BMW’s tyres.

Jason is holding up to the grueling rally as well as anyone, blisters causing him the greatest discomfort.  Day five is a big one taking the team touring around Gascoyne Junction for an anything but leisurely 450km, not including the transport.  The leg is composed of two specials as follows:

Talking to Paul you can hear the dry dust in his voice, behind it though, you can feel the excitement of the rally…GO Team Rooney Go!

Posted by tanami on September 28, 2012 in Motorcycling

Today’s leg 6 has three special stages as outlined below:

SS13 through ‘Winderie’ Station is 114km

That’s a days total of total of 434.17km in special stages.  It’s the second last day, and the last day of big specials (Leg 7 specials are two at less then 30 and 20km respectively). That’s a fact I’m sure Jason is well, well aware of.  If he were not busted, bent up and fully exhausted by now then there is something wrong with him. Have you seen any of the video footage of the riders? Man they are stuffed!

Almost there man….Keep it up Jason and GO GO GO!

Posted by tanami on October 1, 2012 in Motorcycling

Now the dust has settled and the hard miles are done it is awesome to see that the 1983 bmw has made it through the grueling 2012 Australasian Safari. How hard was day six? Here is what Jason wrote about the leg over on Adventure Rider.

“Yesterday was the Kalbarri Death March, haha.. It started off well, nice fast 100k stage, fast and flowing. Second stage was a reverse of an earlier one, and halfway through I lost the back brake cable. Ironically, brakes allow you to ride faster. At first I used some fence wire to bodge it, but could never really get enough tension so it was really just to hold the brake pedal up out of the way. As someone pointed out, its a BMW and therefore doesn’t really need a rear brake. Just downshift and BBBWWOOOAAA down you go.
Fixed it at service.

Stage three was a 200k that at 80ks into I hit a dip and broke the left footpeg off. I found out later this is where the #14 yamaha crashed, and also Manuel. I went back and found the footpeg remains, and someone later pointer out it’s a BMW and comes equipped with two substitute footpegs sticking out from each side. I used some more fence wire to sew the peg remains back on the bike, but it just barely worked. Not proud to say I borrowed the footpeg from #14 bike which was there, in case the bodge job I did failed somewhere over the rest of the stage. It only kind of worked, I was forced to sit most of the rest of the way, or stand on one foot, and when I got back to camp I gratefully returned the borrowed yamaha peg.

The final 20ks were just brutal. As I said I saw Ivan (a very surly Ivan) at km 112, not interested in making convo of any sort, and at km 140 I found Dave Blight who was nursing his bike through a series of electrical shorts brought on by dumping too many times. We rode out the final k’s together, and when we finally reached the finish, I looked over at him and spontaneously starting giggling like a little girl. Couldn’t stop for about ten minutes. Arguably the hardest ride I’ve ever done. They save the best for last.”

Jason’s effort was rewarded with the ‘Andy Caldecott Award’. Andy Caldecott is an Australasian Safari legend who passed in the 2006 dakar rallye. Ross Briggs snapped this picture of Jason with his finishers medallion. 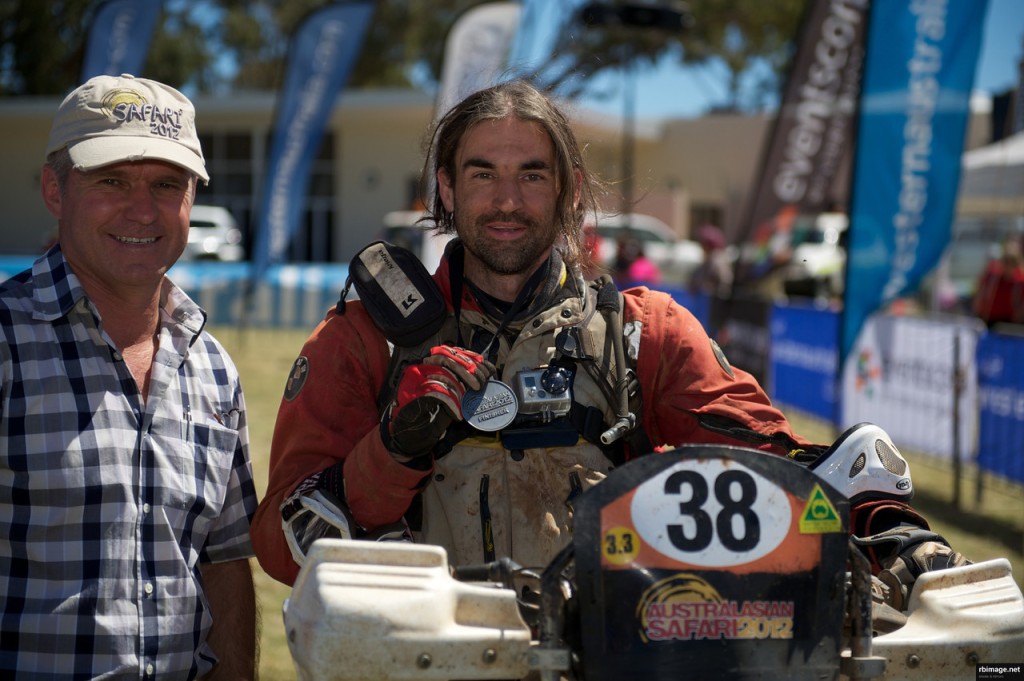 Granted, Team Rooney may not have finished the Safari in the top three. But the fact that a 1983 Bmw that Jason had never even ridden only days before the event was able conquer such a grueling event is testament to the man and the machine.

Well done Jason, Ken and Paul, I hope this blog provides you with useful record of your extreme undertaking!