Fancy a ride outback with a pair of right Rooneys?  Join Chris Cowper (r80g/s) and Ian Bailey (k75gs) on this pictoral pilgrimage to the dusty innards of the Wide Brown Land. 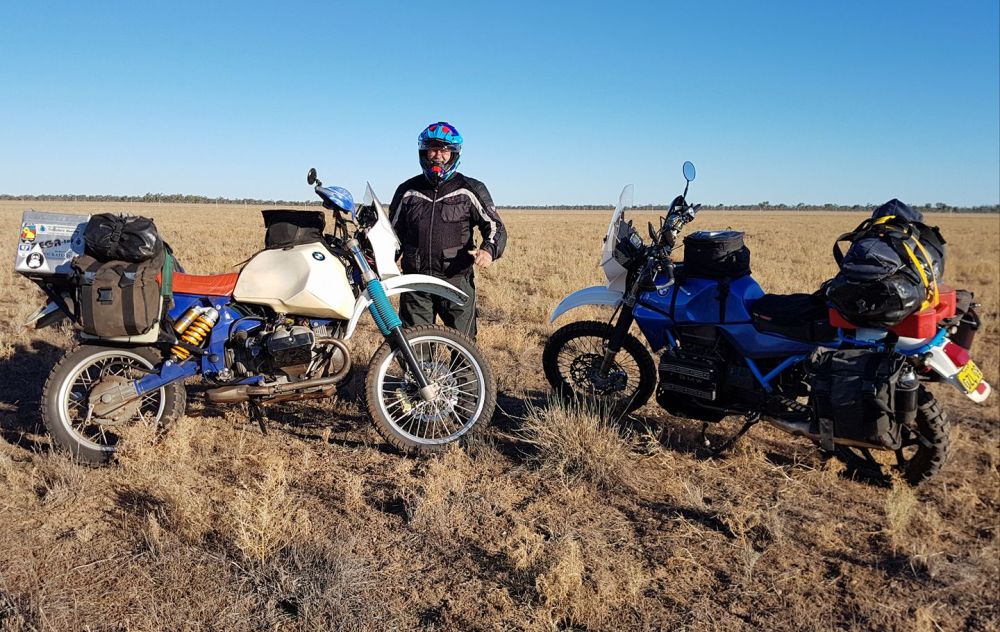 Chris (pictured above) and his Rooney Tuned r80/gs have seen most parts of the world. Some of it more than a few times. Ian’s Rooney Tuned k75gs is featured here. Does it get any better then this? Looks like the boys have stopped here to pee behind a handy tree. Should grow any time now. 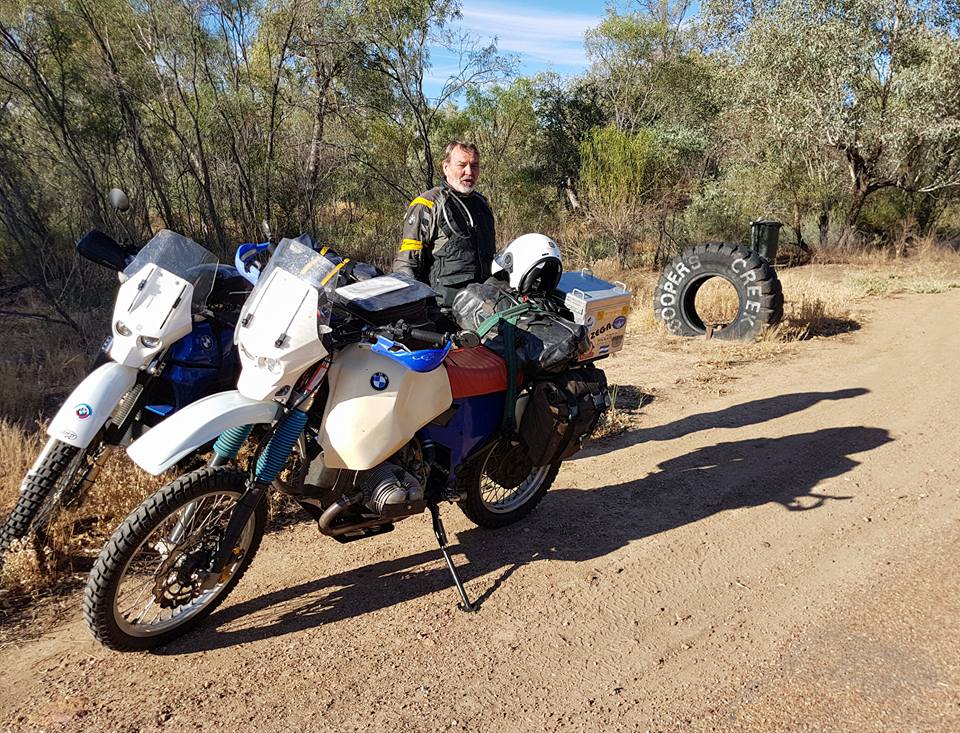 Indigenous Australians have inhabited the ‘Channel Country’ incorporating Cooper Creek for at least 50,000 years.  There are over 25 tribal groups living in the area.

Charles Sturt named the river in 1845 after Charles Cooper, the Chief Justice of South Australia.  It was along Cooper Creek that the explorers Burke and Wills died in 1861. John King survived the expedition with the assistance of friendly Aborigines. Only ten years after the explorers’ deaths, homesteads were being established on the watercourse.

By 1880 the reliable water source had attracted settlers to the point where the whole area was taken up and stocked with cattle. This led to the displacement of local Aborigines from their traditional lands. By 1900 the population had reduced to 30 survivors, just 10% of the original number, as influenza and measles took their toll.

The waterway does not experience regular seasonal floods.Being ephemeral the creek is still prone to occasional flooding, in 1940 a vast area surrounding the Cooper was underwater with the creek being measured at over 27 miles (43 km) wide in places. 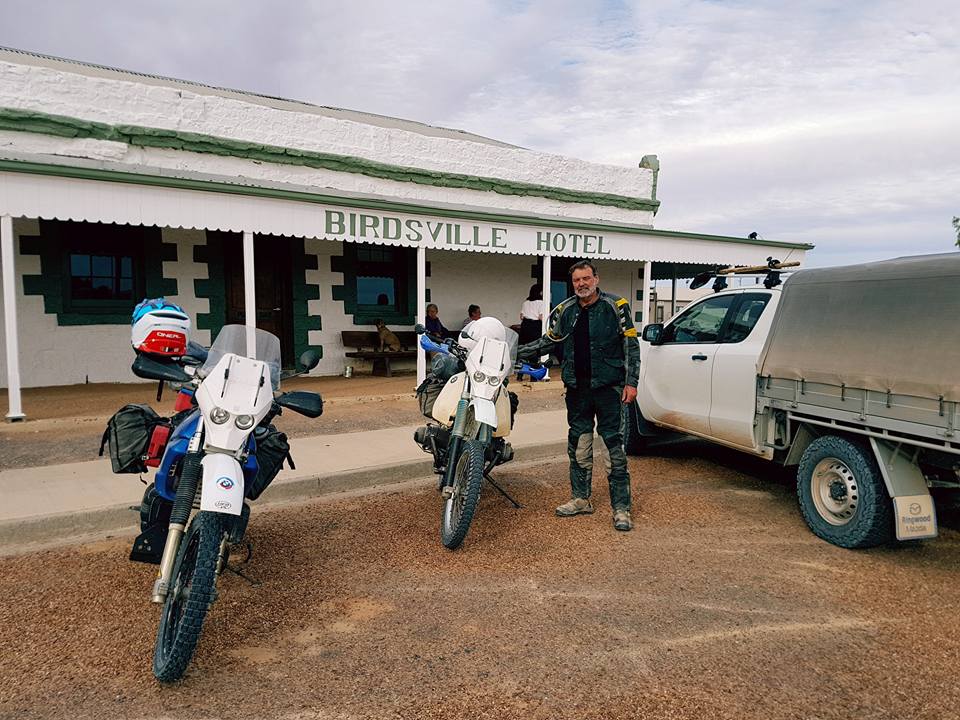 A mere 1000 miles west of Brisbane is Birdsville. A common place for intrepid travelers setting off to cross the Simpson Desert, but also a hell of a destination itself. Hell, as in hot. Temperatures can reach 49 degree Celcius  (121 degree Fahrenheit)  for four months out of the year. So the Birdsville Pub is the place to be.

Looking a bit quiet above the Pub bursts at the seams during the annual Birdsville Races, which are held in September each year in aid of the Royal Flying Doctor Service of Australia. The town’s tiny population is augmented by between 7000 and 9000 people for the two-day event, and hundreds of aircraft fill the town’s 1,700-metre (1,859 yd) airstrip.

Take an aerial tour of the region and fly over the pub and town here. 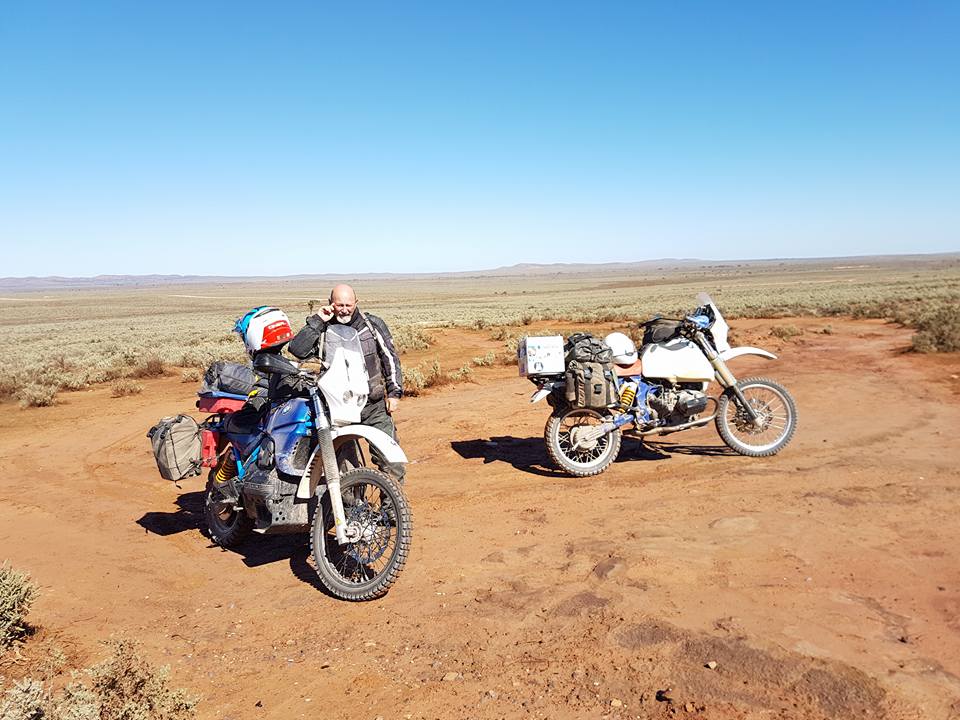 Ian reflecting on an almighty Australian adventure. Here the boys are making their way home via The Flinders Ranges nearby to Wilpena Pound, a natural amphitheatre of mountains located 429 kilometres (267 mi) north of Adelaide, South Australia.

“The Pound” is an iconic landmark of the Flinders Ranges, the largest mountain range in South Australia, which starts about 200 km (125 mi) north of Adelaide. The discontinuous ranges stretch for over 430 km (265 mi) from Port Pirie to Lake Callabonna. 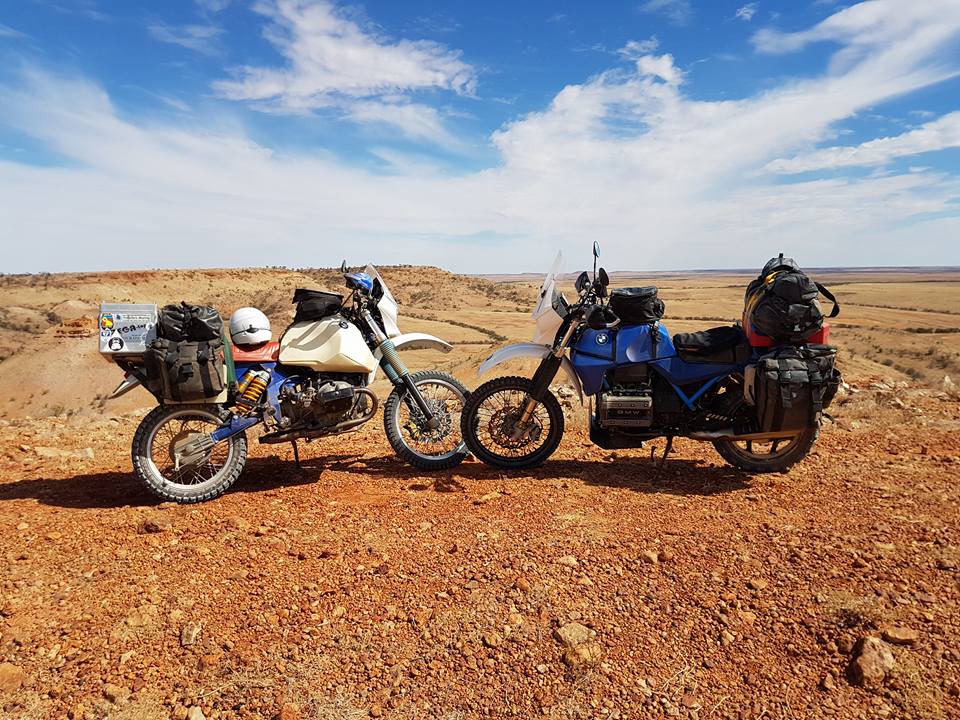 The first humans to inhabit the Flinders Ranges were the Adnyamathanha people (meaning “hill people” or “rock people”) whose descendants still reside in the area, and the Ndajurri people who no longer exist.  Cave paintings, rock engravings and other artefacts indicate that the Adnyamathana and Ndajurri lived in the Flinders Ranges for tens of thousands of years. Occupation of the areas Warratyi rock shelter dates back approximately 49,000 years.

Some aging but enduring blokes, err, I mean … bikes in an ancient but enduring land. Seems quite fitting doesn’t it?

Thanks Guys, great to share your adventure into such a sparse and yet rich part of Australia.