Each ‘Rooney Cycle’ is built as a  bespoke machine to cater  for the intended use of the operator.  Before a spanner is turned the demands required of the machine are defined and a practical design brief is agreed.

The final application influences the choice of components, the structural requirements (durability), the required capabilities (luggage, pillion etc), and the very set up of the machine with regard to suspension and rider comfort.

Rooney Specials are renown “no nonsense” machines where form is the servant of function.  Rooney specials are bikes for bikers. That, for me, is what makes them so damn cool.

The machine at the top of this page and immediately below is the Special that Paul built for me in 2003-4.  The birth of my first child required that I had to sell that machine for financial reasons but I retain some truly fond memories, mostly while playing rally racer through the forests around the Glasshouse Mountains in South East Qld, Australia.

The Monolever R80G/S remains in my opinion the epitome of GS philosophy.  It is simple, durable and reliable.  The brief for this bike was to retain those qualities but improve the touring capacity for two, with (soft) luggage, over the desert terrain of inland Australia (I was actually working in Tennant Creek NT when I placed the order).  The frame was reinforced and the suspension improved while non essential items were trimmed off and power was increased.

After my ownership that cycle went on to circumnavigate the globe in the hands of Chris Cowper, was then rebuilt into the more specialised machine shown below and then sent out again! 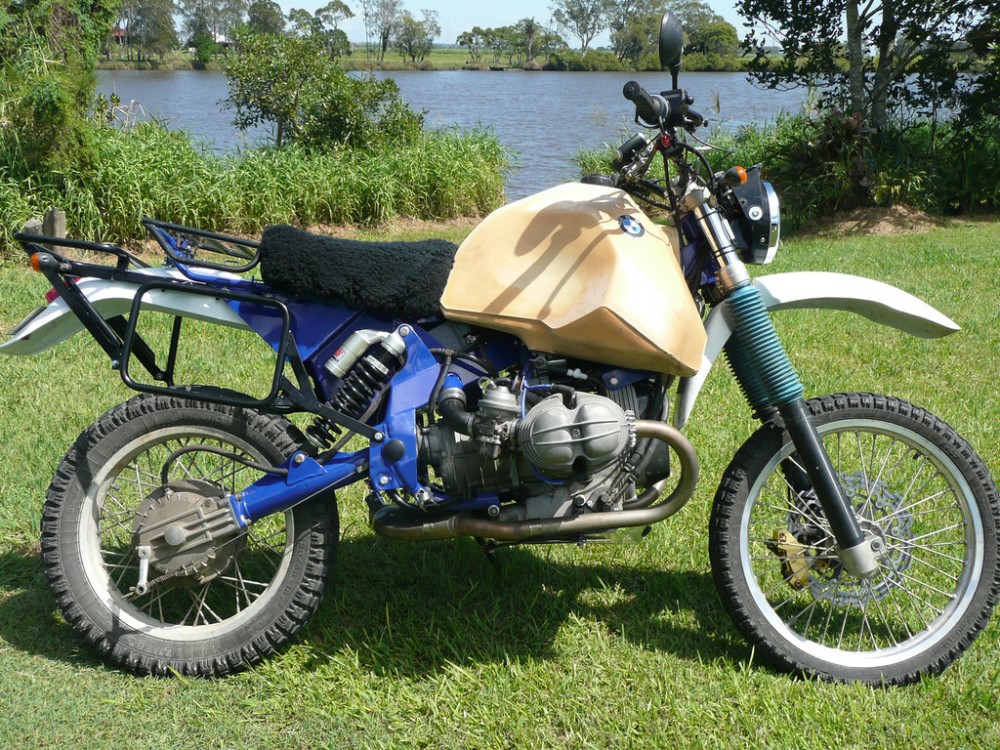 Look once and you’ll notice that the geometry is not that of a G/S series cycle.  A second glance and the solution, in the blue frame, is apparent.  The frame is examined in more detail on the ‘Workbench’ page. Orders for these frames are apparently starting to roll in and I will post images of the results if and where I am able.

The following two cycles are most recent examples of machines built for serious touring duty under order of an adventurous couple. Neil and Clarissa are now off on their round the world adventure and you can tag along with them here. 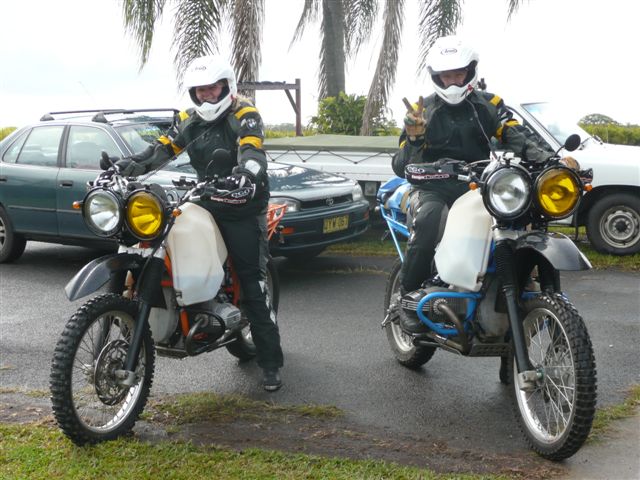 Gotta love a his and hers matching set. The giant lights are Dual 8″ race lights made by the US firm ‘Baja Designs’. They had to be modified however for Australian compliance to include the facility for a low beam. You can see that both bikes utilise Wp 50mm ‘extreme’ forks and run r100gs solo seats and racks for maximum luggage capacity. The Acerbis/HPN 43l tanks were selected unpainted for ease of monitoring fuel.

These global touring bikes are all pretty cool but for a silly grin nothing beats a single minded race machine.  Having my original dream bike broken down to build the first Rooney framed prototype was made somewhat easier as he let me ride the Australian Safari race bike (just a little out of his sight). In its first outing the bike did quite well during the prologue but has since been tormented by one thing or another forcing an early retirement. A holed air induction pipe was one drama I recall.  Simon Pavey was lined up to ride the bike in the 2011 event but electrical gremlins during testing led to a last minute cancellation.

As Simon could not make it to the photo shoot here am I on the machine itself, feeling quite proud that my own original silencer graces the bike and undoubtedly, on account of its heritage, adds to its performance significantly. 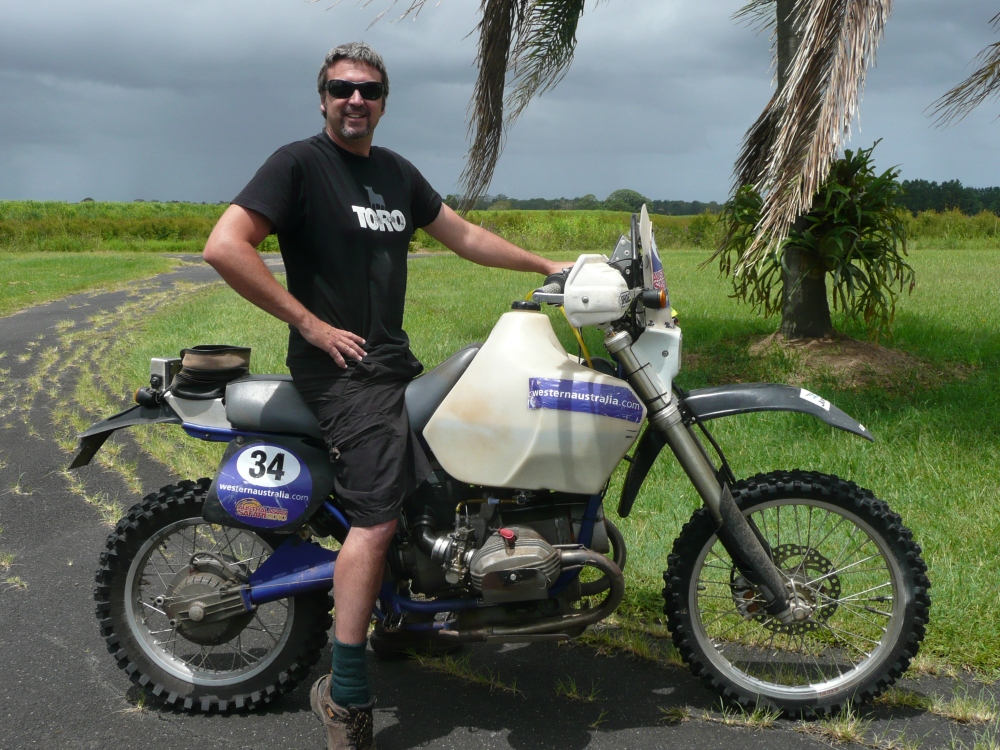 Alright then….here it is (below) with Graham Grant at the controls during the 2010 Australian Safari. Motorcycle USA’s Justin Maley told of the interest the bike generated in his story here: 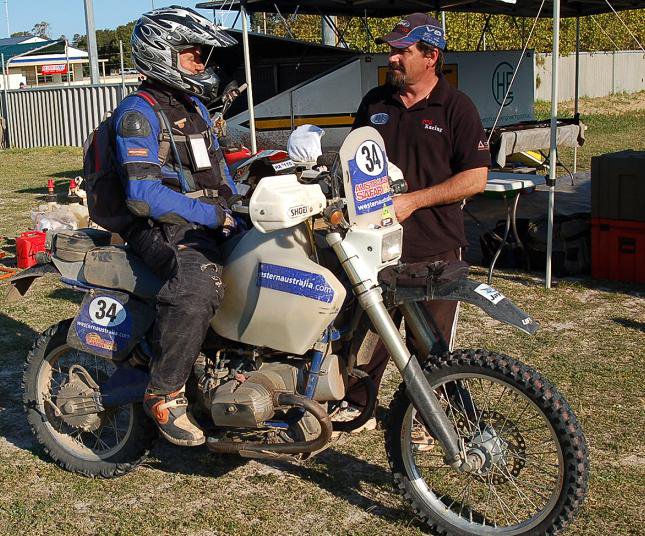 Below is Graham’s personal bike, the other an r65gs Rooney Cycle built specially for his wife, but as I understand as frequently used by Graham! 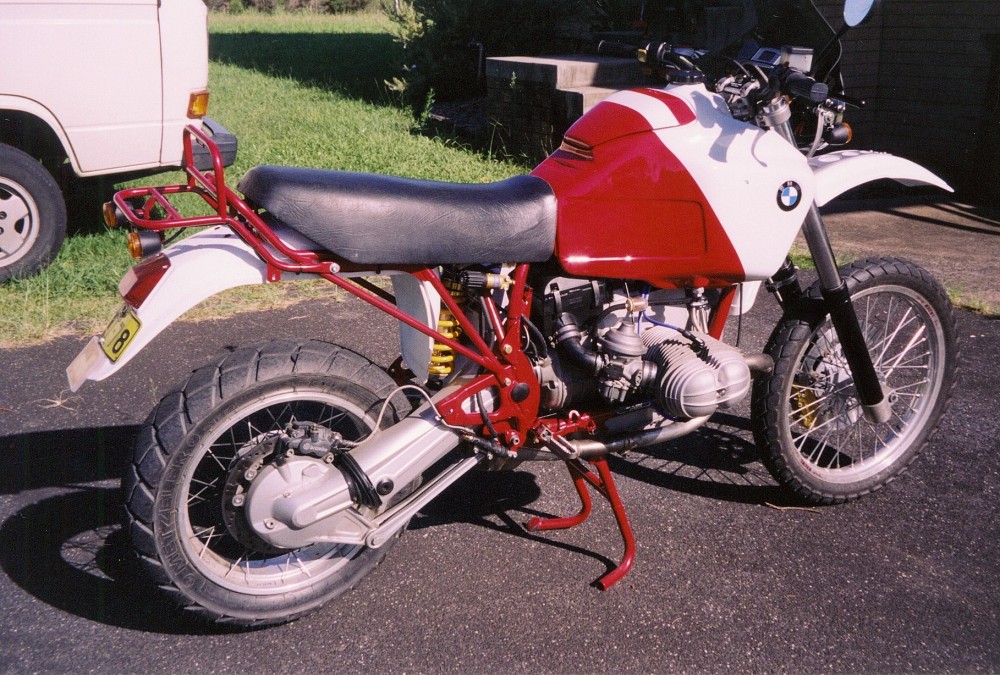 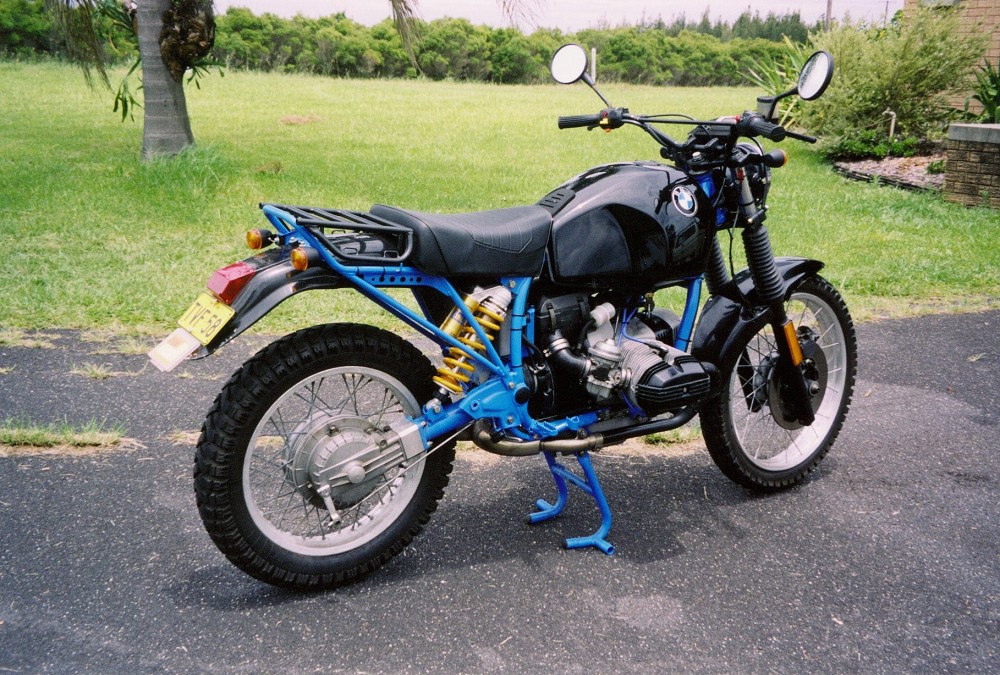 Speaking of race bikes….check out the following Herbert “Scheck” special restored by Paul in 2008.  Scheck is the racer and BMW tuner that took Hubert Auriols 1983 Paris – Dakar winning BMW from 800 to 980cc to give Hubert his second Paris – Dakar win. Hubert and Herbert, how could you lose? As I understand Herbert is still very active in the European vintage enduro scene riding his own classic BMW machinery. 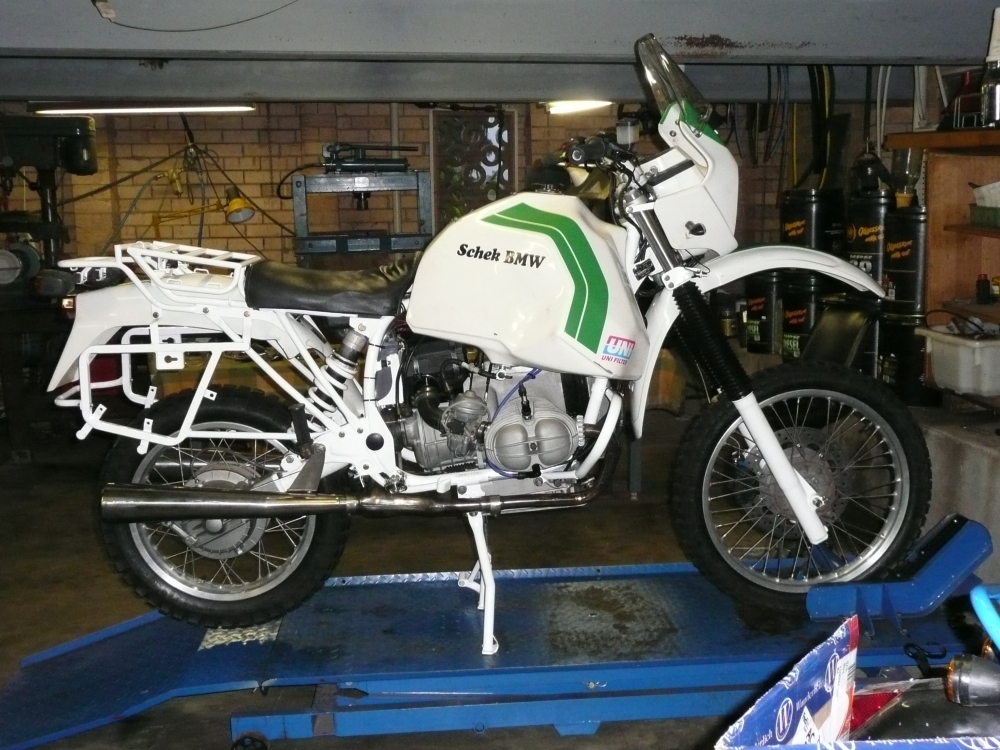 Not everybody wants (or needs) a bike capable to take on the Dakar. The bike below was built for a customer in Sydney NSW Australia. It combines the features of a range of models in order to meet the very specific requirements of the rider. An R100 engine and frame are coupled to r80g/s forks, subframe, seat and handle bars. The R100gs 26 litre tank is utilised while the shocks are r65 length. A 320 mm rotor and 4 piston caliper handles the braking. I really like this bike and consider the black, green and white colour scheme provides for a clean and sharp look. 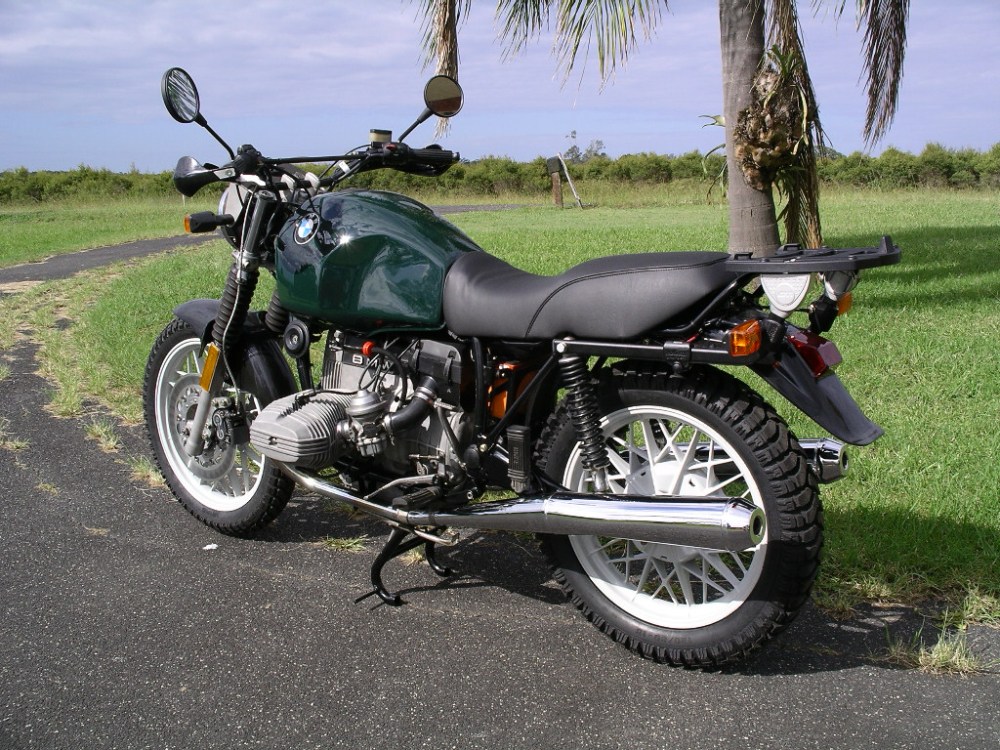 Where big bikes with big engines were once the order of the day the very practical trend towards smaller, lighter machines is reflected also in the style of classic bikes being restored, think of the cafe racer madness engulfing the world.  It’s about the joy of riding really, and that’s gotta be pretty cool.  Correspondingly Rooney has produced a number of GS ‘lightweights’. The one that follows is without doubt one of my favourites. Although still tall with 300mm of travel front and rear on WP suspenders it runs an r65 twin plugged engine that has been shaved of excess weight.  With an r80g/s frame and the GS 26 litre tank it weighs in at 163kg (less gas). It screams fun. Built in 2010 this bike lives in Perth WA. 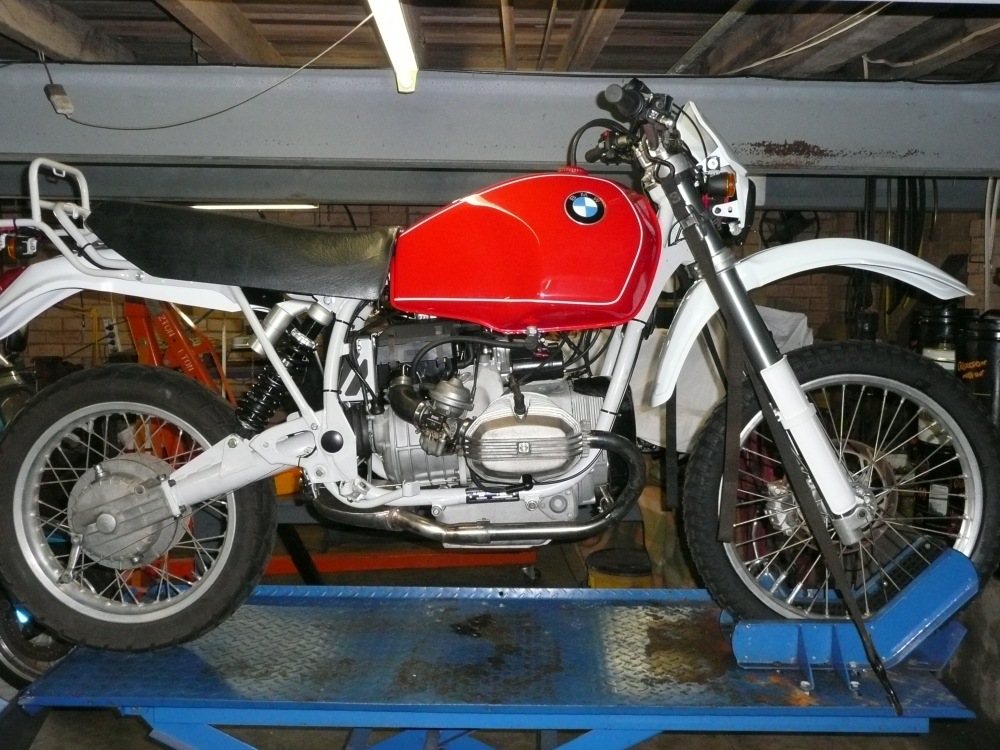 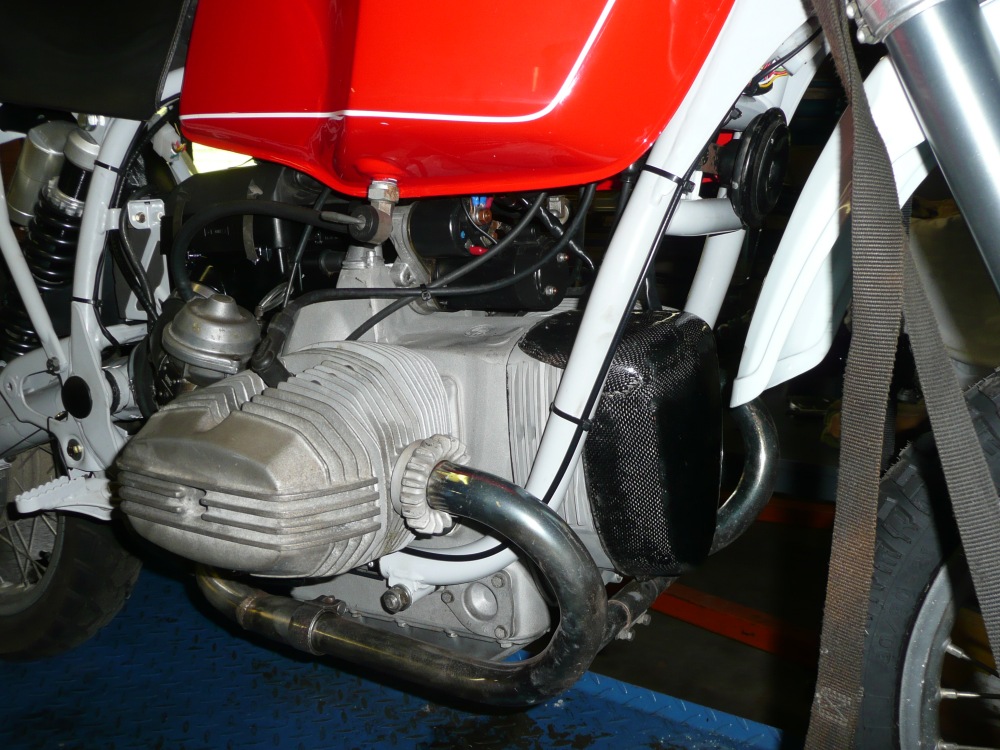 The one below is a late 2011 restoration and also a r65 based machine but running r100gs front suspension and a less imposing 50mm swing-arm extension. 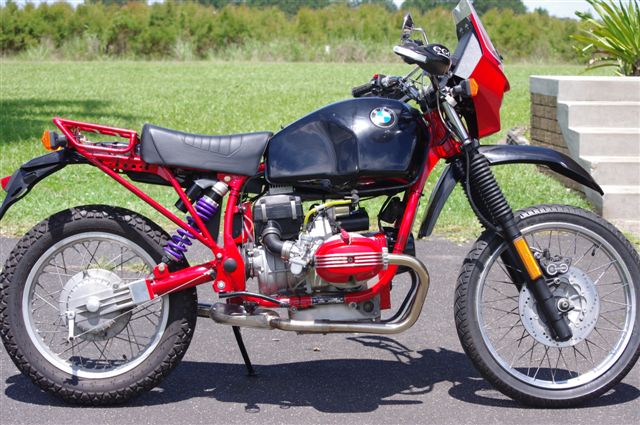 If you are wondering about the exhaust system on the above bikes these are examined on the Workbench, where detail of the ‘Rooney Muffler-Collector’ developed by Paul as a practical solution for off road tourers is provided.  They are an awesome concept well executed.

Although less practical, equally well executed are the artful reverse cone megaphones on the machine below constructed by Paul in 2004, for me, in fact. These pipes were skillfully completed by Pipemasters in Brisbane. The concept was after the early ‘Dakar’ desert race bikes of Eddy Hau, Herbert Auriol and Gaston Rahier. Not practical for much more than desert raids they did however look cool and sounded awesome. Of course they were short lived and the remaining one that was salvaged now graces the Rooney Australian Safari race bike. 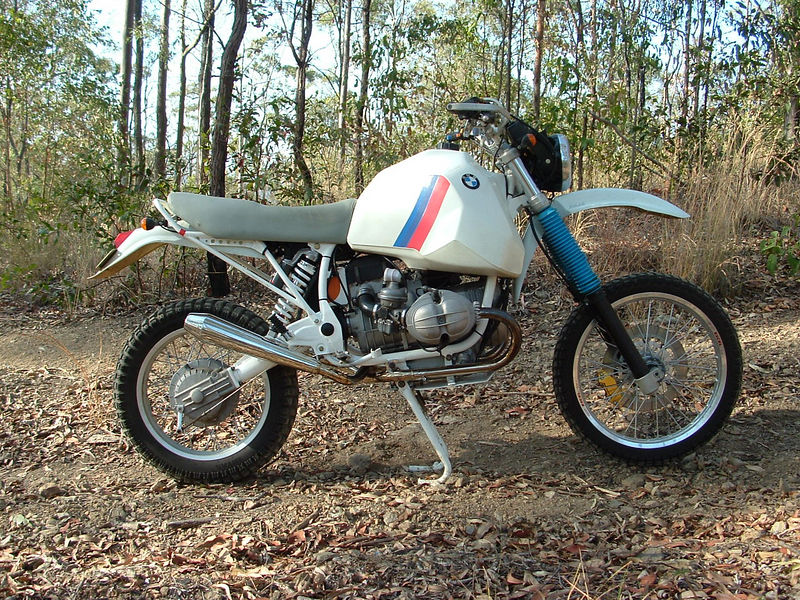 How did I miss this machine…bad in black… 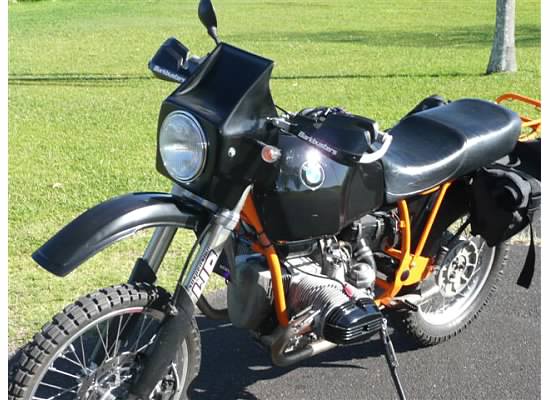 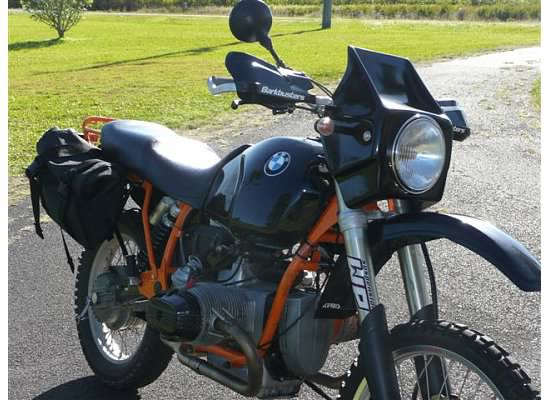 On the Road Again

Well, it must be about time to turn our attention to some road going cycles.  BMW of course has produced some of the most iconic road cycles of all time.  The R100rs and the R90s each have a unique position in the history of motorcycling.   The R90s is of course now one of the more desirable and collectable of BMW cycles.  The one shown here came to Paul as essentially a “rust bucket”. 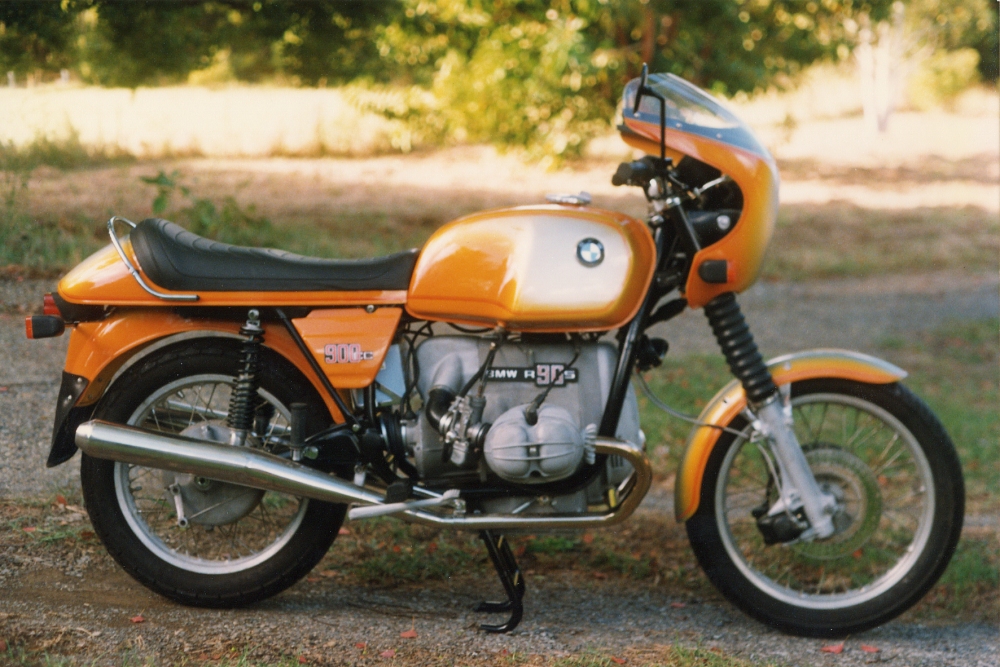 While Paul’s restoration retained the heritage of the cycle the  engine was balanced with an upgraded cam installed and the ignition system also modified for improved performance.

Personally though I have always been more of a enthusiast of the R100rs.  Having said that I could not put to you exactly what it is that makes it happen for me, and oddly, overall, I am not really a big fan of faired bikes.  I once owned an Guzzi Mk III Le Mans and I think it has the same kind of character.  When I saw the following example of another of Paul’s restorations I was impressed that the performance modifications, while obvious, had not undermined the character that so appeal to me. 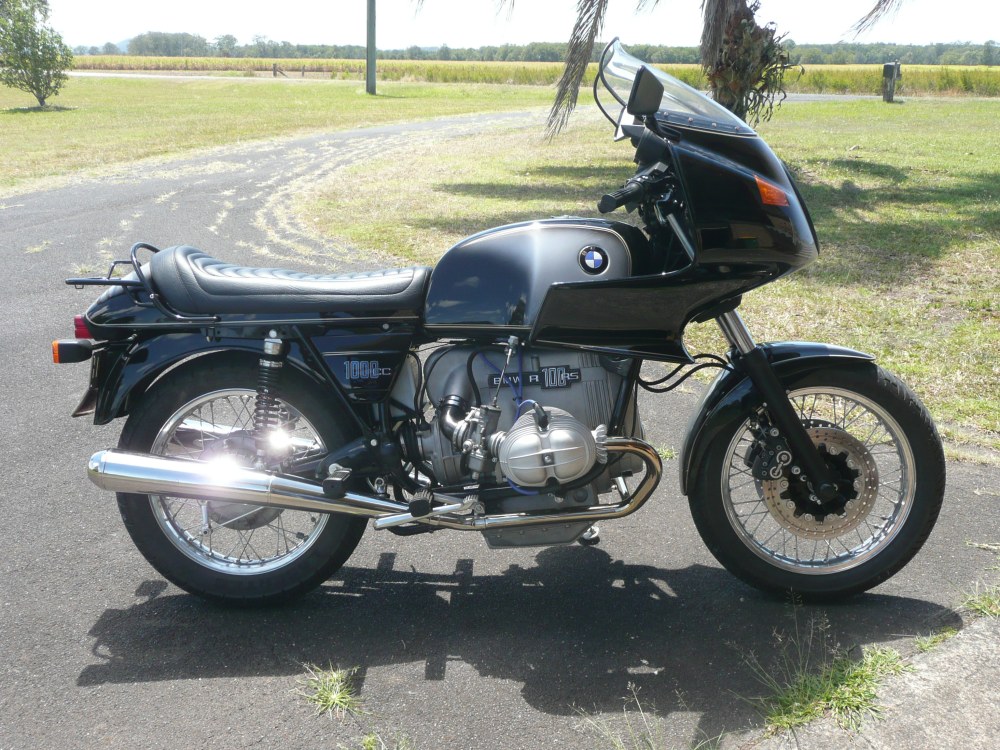 This RS sports R100R forks with 4 piston calipers up front and YSS shocks at rear, it rides on 18” wheels.  The high compression engine has been twin plugged with a 336 cam added.  A big sump and Dellorto’s complete the picture.  The smoke grey is sweet. It looks awesome but clearly, this is a bike to be ridden.

This little old r50/5 with its BMW motorsports livery and Egli front end with Lockheed is a little something Paul whipped up for a “bit of fun” after picking up the donor bike in pieces (yes, in a chicken coup).  The running gear is mostly stock but with that paint, suspenders and replica conti’s it has captured the feel of a classic racer. Paul thinks it’s Ok …. I love it: 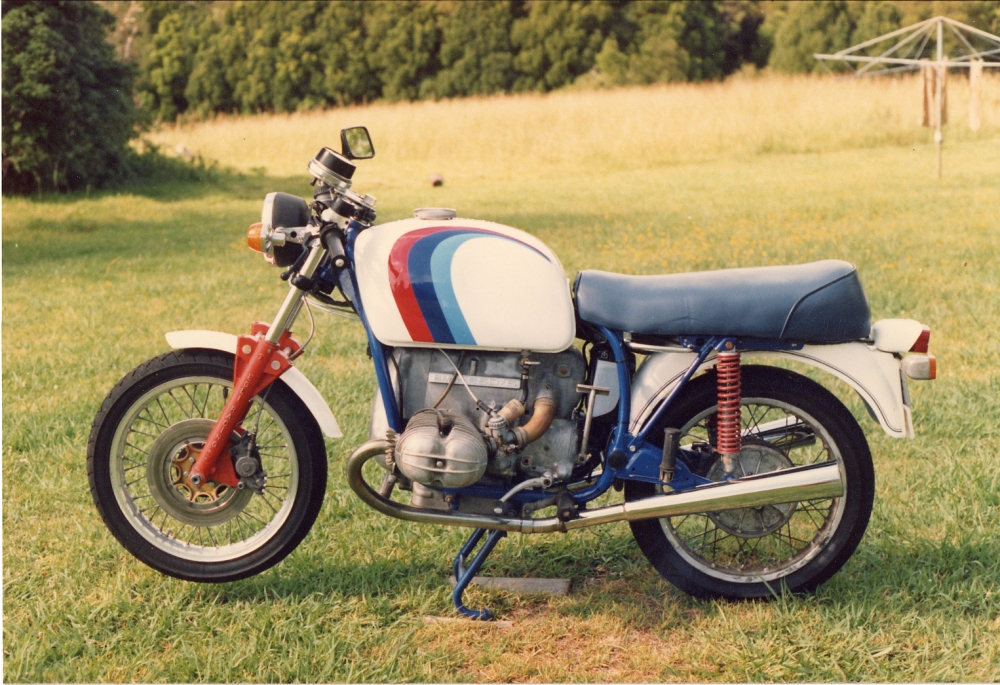 A little more modified and a lot more purposeful is this R100s based cafe race bike. How sweet is this? Another older restoration Paul completed (as seen below) “about 20 years ago”.  It has borrowed a Yamaha front end with a Honda fairing and seat cowl. 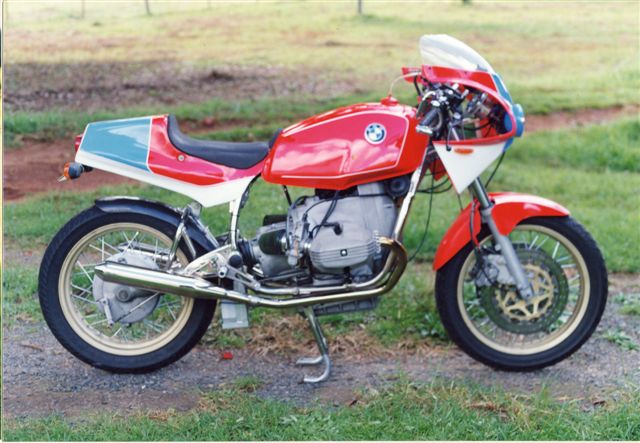 Flat side 40mm carbs and a twin plugged engine helped this sweet machine, as Paul recalls, give a MHR Ducati a good surpise shortly after it was run in.   Paul modified the rear swing arm to mono shock and to take a hugely wide (at the time) 3.5″ rear wheel.  The frame is nickel plated. The bike is still getting around in Western Australia albeit sans the fairing and with an aluminium tank.

Skip forward to around 2006 and we can see what Paul can do with a little mixing and matching of modern components. This track day bike Paul built entirely from parts. An R100gs frame got a K1100 front end and an R1150 swing arm and and diff. At 86 rear wheel horsepower it’s the most powerful engine Paul has built to date. 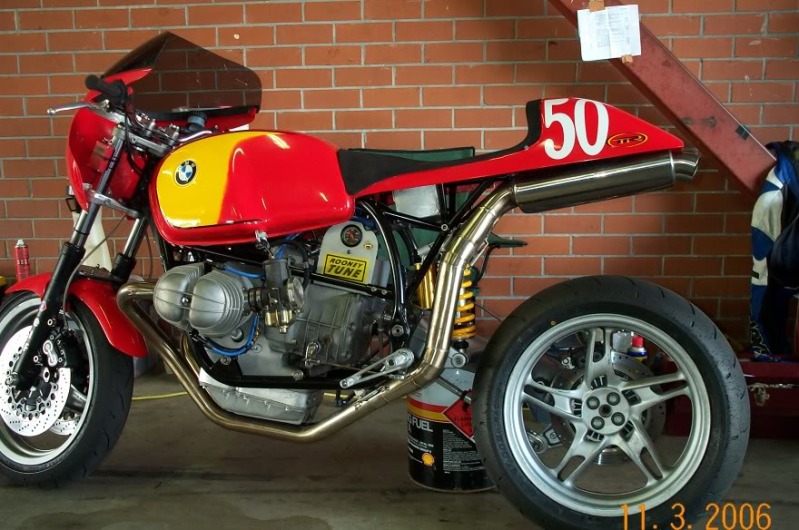 The owner of this bike is quite tall which explains the height of the sub frame and seat.  He is presently converting the machine into a road bike.

The seamless power curve of the k75 BMW along with the famous durability, reliability and longevity of the K series engine have led many to wonder of its applicability for a dual purpose touring motorcycle.  There are now quite a few such bikes  being enjoyed around the world.  Here are a couple that Paul has prepared here in Australia. 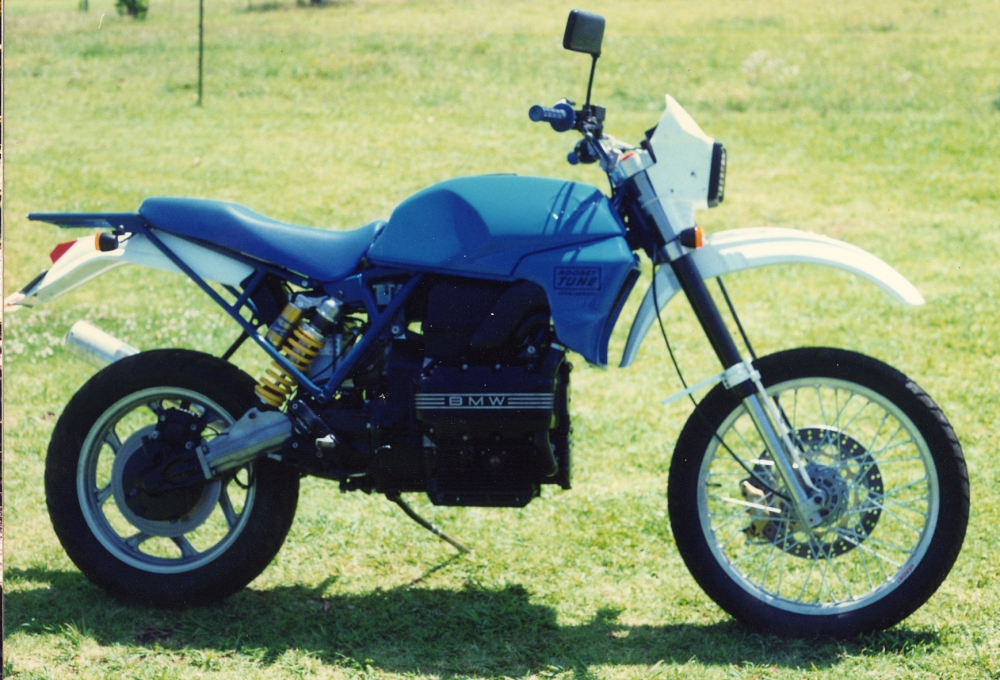 The three cylinder K75 lends itself quite nicely to the dual sport treatment. The one above sports Ohlins rear and Wp front suspension with a 320mm front disc and 4 spot caliper. The blue and white looks neat.

This one (above) features Marzocchi forks and looks just the thing for long tours on all types of roads. The K’s are so comfortable and I find myself more and more attracted to them the older I get!